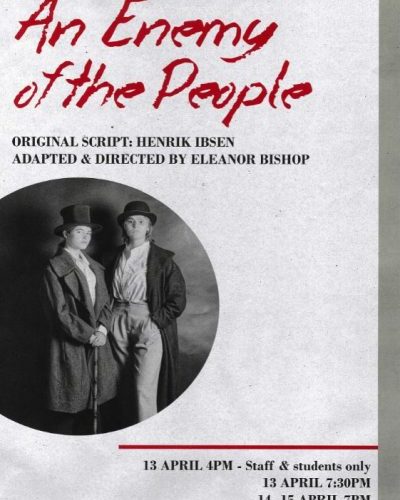 22/03/2021Site Newsby Lorraine Stafford
School Production “An Enemy of the People”: Students (year 10 to 13) and staff have been working  hard during term one to produce an impressive adaptation of Henrik Ibsen’s play, “An Enemy Of The People”.  This play is a thought-provoking piece just as relevant to today’s society as that of the 1800’s when it was originally written. The story follows Dr. Thomas Stockmann (played by Stella Yiannoutsos) who speaks out about a serious problem in his hometown, only to wind up as the scapegoat. The conflict between Stockmann and those he thought he could trust examines and questions cancel culture and how we tend to adhere to “norms” and go with the group instead of voicing our opinions.   We are extremely lucky to have Eleanor Bishop, a WGC old girl and incredible New Zealand director, directing our show, thanks to Creatives in Schools funding.

The shows are in the Wellington Girls’ College Hall in Week 11 of this term.

Tickets will be available from the student office from Monday  22  March. Seating is limited so we encourage students to get in quickly and support the show! $10 for students and $20 for Adults.