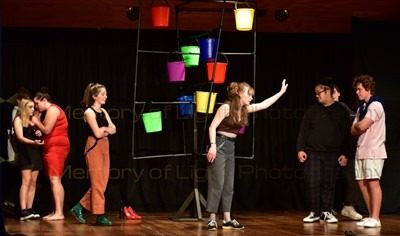 Holly Willis (Year 11) and Elsa Haywood (Year 12) directed an imaginative Witches scene from Macbeth. TamonSmith, Jiya Raj, Ruba Carruthers created havoc in the kitchen while Masterchef and Ross Simpson looked on.
Daisy van Wel directed a Cuba Street at 4am interpretation of Romeo and Juliet in a combined Wellington Girls’ and Wellington College production.  She has been awarded the Outstanding Stage Combat award, as well as the Outstanding Performance in a Tragedy award. On top of this she has been offered direct entry into the prestigious National Shakespeare  Schools Production. Congratulations to her and her team of Year 13s including Sarah Brownlee, Aisling Lawson, and Imelda Morgan.
Photo credit of Memory of Light Photography.