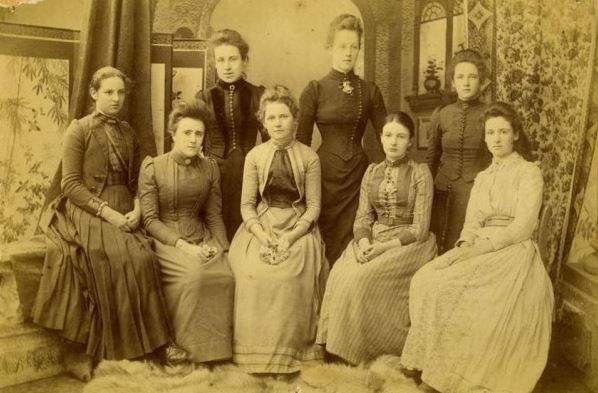 After some dabbling with the idea of higher education for girls at Wellington College in the 1870s, the founding fathers of this school (and they were all men) decided to lease a building in Abel Smith St, and in October 1882 a ‘Lady Principal’ was appointed to open Wellington Girls’ High School. Miss Martha Hamilton came from Christchurch and the school opened on 2 February 1883, with 40 girls.

Girls were expected to learn from a very broad range of subjects – many very similar to those we study today: French, Algebra, Sciences, History, Maths, English, Geography and Drawing we recognise. Calisthenics might not be so clearly understood. Girls intending to go to university studied Latin. It was a private school so parents paid full fees and they had some say in what was taught – which was how Drawing, Needlework and Vocal Music all came to be in the curriculum.

By the end of 1883 there were nearly 100 students and the school was overflowing. Miss Hamilton was clearly a woman with a strategic approach. In 1884 the Premier, the Rt. Hon. Robert Stout visited the school. He saw extremely crowded classrooms, with girls sitting three to a seat and when the bell rang part way through his visit, all 130 girls, 5 staff and 4 visitors spilled into the tiny corridors as everyone changed rooms. Sir Robert declared that he didn’t know things were so bad; Miss Hamilton replied, ‘We cope as best we can. I have written to the Government asking for a tent.”  As a result of this visit, the Pipitea St site was made available and the school we are now part of began to take shape.
Miss Hamilton left in 1900. Her annual report to the Board that year perhaps sums up best what she aimed to do in her time here. She wanted:

‘It has been our uniform aim to educate the whole body of girls entrusted to us and to teach them to act in their daily life from the highest motives.’

The school Miss Hamilton created has changed a great deal since 1882 but its aims still align closely to the original vision for the school and Miss Hamilton’s comments as she was leaving. Today we are a state school, with around 1200 domestic and up to 60 international fee paying students. The staff numbers over 120 and the school is governed by a Board elected by the parents. The Board also has, as full members, a student, a staff member and the Principal.

Wellington Girls’ College has a proud history as a school which maintains academic success while fostering a love of learning and the active development of the ‘all round girl’ – with emphasis on sporting, cultural, service and leadership activities within the school and wider Wellington community.

Uniforms change, buildings change, curricula change, staff change. What hasn’t changed is our core purpose which is best summed up in the school’s Mission Statement – Wellington Girls’ College will prepare young women to go out into the world as independent thinkers with respect for themselves and others, the confidence to accept and respond to challenges, and an enduring passion for learning.